The Indians announced Monday that they’ve acquired catcher Sandy Leon from the Red Sox in exchange for minor league right-hander Adenys Bautista. In order to open a spot for Leon on the 40-man roster, Cleveland has designated right-hander James Hoyt for assignment. 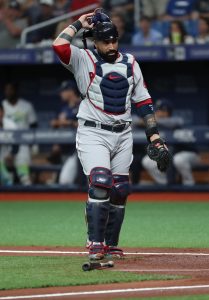 Leon, 30, would’ve likely been non-tendered by the Red Sox but now seems likely to be tendered a contract by his new organization. The swap doesn’t exactly bode well for Kevin Plawecki, who’d previously been in line to serve as the primary backup to 2019 breakout catcher Roberto Perez. Leon is projected by MLBTR contributor Matt Swartz to earn $2.8MM in 2020, whereas Plawecki is projected to earn $1.5MM.

In Leon, the Indians are acquiring a switch-hitting veteran, although his value lies in his glove as opposed to his bat. Leon did have one standout season at the plate back in 2016, when he hit .310/.369/.476 in 283 plate appearances, but that output looks like an anomaly; in three years since that strong showing, he’s…