The Padres and Athletics have reportedly agreed to a trade that’ll send infielder Jurickson Profar from Oakland to San Diego in exchange for catcher Austin Allen and a player to be named later. Profar, who’d been projected by MLBTR contributor Matt Swartz to earn $5.8MM through arbitration, was a non-tender candidate in Oakland but is now in line to play a significant role with the Padres in 2020. The move reunites him with Padres GM A.J. Preller, who played an integral part in signing Profar as an amateur during his time with the Rangers organization. Meanwhile, the A’s pick up a potential backup catcher who can step immediately onto the roster. 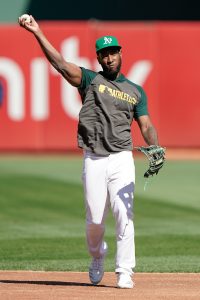 San Diego’s trade of Luis Urias last week left a hole at second base, where Ian Kinsler, Greg Garcia and Ty France all seemed likely to vie for playing time this spring. Now, Profar will presumably step to the top of the depth chart, rounding out an infield that also features Manny Machado, Fernando Tatis Jr. and Eric Hosmer.

Why A.J. Preller and the Padres decided to bet on another rookie manager in Jayce Tingler (The Athletic)